A key concern of this project is the representation of labour. It is, therefore, critical to consider photographers and practitioners whom have sought to address such representations in meaningful, sustained and innovative ways. Known mainly for his images depicting the construction of the Empire State Building, here the specific reference is the early project work of Lewis Wickes Hine. Ground-breaking for its subject matter and the means and methods of representation that he engaged, this is further underlined in how the word, documentary, did not exist at this time in relation to the description of such visual undertakings. 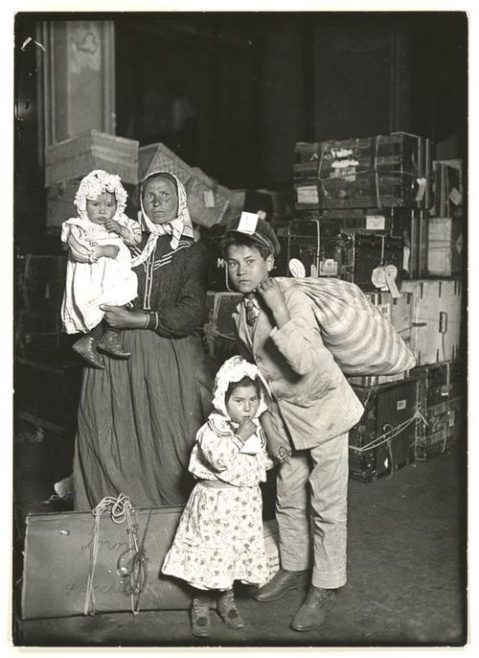 In 1904, the teacher went to Ellis Island to witness the largest ever migration to the United States. Hine began making a series of immigrant portraits, which he would continue until 1930, later described as ‘incontrovertible documents of the human meaning of history’s greatest migration. The mass aspect of Ellis Island was left to the statisticians and social cartographers. Hine took care of the human equation’ (McClausland quoted in Rayner 1977: 42). Hine had met and befriended the wealthy businessman Arthur Kellogg, and through his patronage began documenting change for The Charities and Commons Magazine, later re-titled The Survey (Rayner 1977). He used photography ‘as a means to an end – to call attention to social injustice, to campaign for change and to celebrate the dignity of working people in the modern world’ (Panzer 2002: 3). He would devote his life to the portrayal of, among others, the plight of child labour, working conditions, the role of women, tenement living, veterans from the Civil War, disabled workers and the role of visible minorities. It is interesting to note how he circumvented issues concerning access to factories regarding child labour: ‘he pretended he was after pictures of machines…while one hand in his pocket made notes on ages and estimated sizes’ (Trachtenberg 1989: 201). 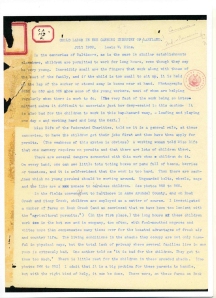 In this report (image above), one of 30 such documents in the U.S. Library of Congress collection, submitted with accompanying photographs to the National Child Labour Committee in 1909, Hine addresses the conditions of child labour in the Canning Industry in the American state of Maryland. Steeped in the observational and factual, anecdotal incidents are recounted as he encountered individuals working there, including the mother and widow, Mrs. Kawalski:

Many things has been misrepresented to her after they got there, she found that all the children, whose fare had been paid by the company, had to work all the time. The younger children worked some and went to school some, but they worked regularly as soon as they were able to stand up to the benches. “We lived xxx in rough shanties. It’s no place for children. They learn too much”. They had to furnish their own food and their fares were taken out of their earnings little by little. They didn’t get ahead any financially although it was a good year, at this place. “Call this slavery!” she said. (original delete marks, Hine 1909: 3)

Particular attention should be given to Hines’ subject position as manifest both in his working process and the framing technique employed. This relates primarily to a large part of what I would describe as his ‘early work’ from 1905 and up to, and including, 1920. Hine generally positioned his subject at eye level and in the centre of the frame. Whether individual or in groups, they presented themselves to the camera and the viewer. He maintained ‘careful notes’ of his encounters at all times and the work was usually accompanied by extended titles and captions (ibid.: 20). Hine was aware of the potential for allegory; ‘a picture is a symbol that brings one immediately into close touch with reality’ (Hine [1909] 1989: 207). 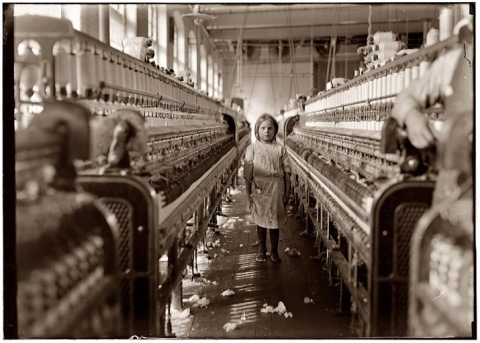 The Little Spinner is standing (image above). No more than 7 years of age, with hands by her side, there is a silence about her as she stares directly at the photographer, at the viewer. Hair barely combed, she is lost in size in the midst of the machinery surrounding her, all bolted to a floor spattered with traces of cotton. Her shoeless feet and little white smock dress are adorned with traces of the same cotton that is weaved web-like around her and her feet. She stares and we must return that stare for there is nowhere else to look, our perspective created by the row of machines denying us any escape. Her presence, our guilt? Our children, their futures? As we look at this young girl, certain histories and possibilities are posited, but nothing is complete and one now wonders the outcome of her fate. Hine demonstrates his understanding of the effectiveness of perspective in this instance. We as viewers are literally and visually forced to confront the human face of this unjust labouring situation. Aware of this potential, Hine coined the terms ‘social photography’ and ‘interpretive photography’ to ‘combine publicity and an appeal for public sympathy…to create a photograph often more effective than the reality would have been’ (Panzer 2002: 15). Here, simple in its presentation, the image exudes a subtle and silent quality amidst a scene which no doubt possessed harsh mechanical volumes. Hine himself noted:

She was tending her “sides” like a veteran, but after I took the photo, the overseer came up and said in an apologetic tone that was pathetic, “She just happened in”. Then a moment later he repeated the information. The mills appear to be full of youngsters that “just happened in”, or are “helping sister”. (Freedman & Hine 1998: 26) 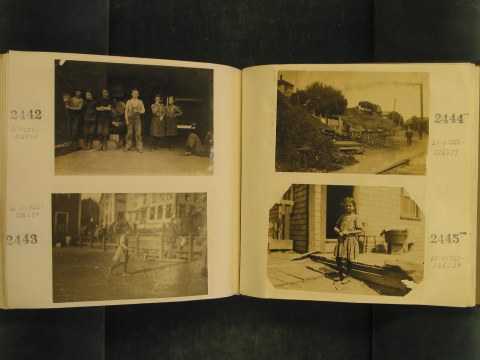 Alongside his meticulous note-taking and written documentation, Hine maintained albums of his edited photographs (see above) – numbered and assigned, specific to each location where the images had been made. What is significant also is the sophisticated dissemination of the vast amount of photographs Hine generated. 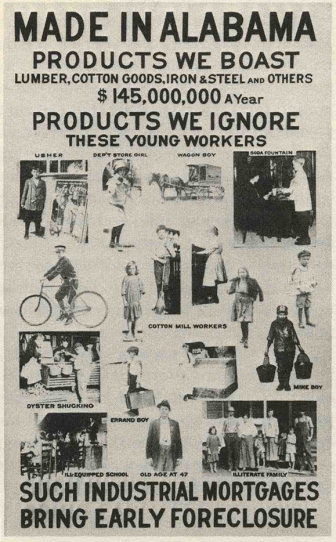 Intended to affect public opinion and, thereby, government policy, there was a considered and critical mindfulness concerning the distributive possibilities of this visual material. For example, dedicated images surrounding narratives like this poster (image above) from Alabama addressing the plight of underage labour. While incorporating a sense of irony in the child now being the product, in turn it focuses attention on the fact that through/from the use of such child labour, factory owners could face the severest of penalties. The image below is what I would consider a key document from Hine’s work dating from 1907, ‘Night Scenes in The City of Brotherly Love’. Sponsored by Kodak, the pamphlet was published by the National Child Labour Committee. 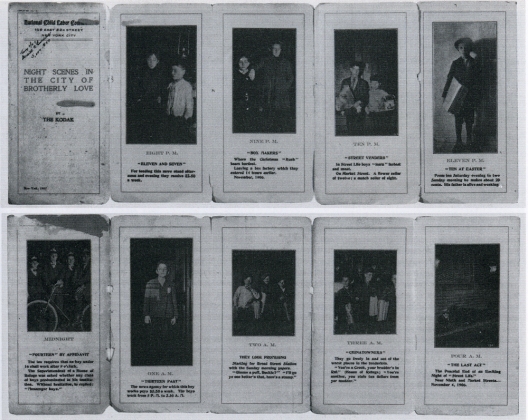 There are ten sides to the document, nine of which contain portraits of young boys at work though the night of 4 November, 1906. Beginning with the first portraits of two boys at ‘EIGHT P.M’, the images continue along past ‘MIDNIGHT’ until ‘FOUR A.M.’, each portrait containing observational and anecdotal information collated by Hine. Made in Philadelphia at the beginning of the 20th Century, this significant document displays a sophisticated understanding of design, presenting us with an item which would easily fold up into something small and able to fit into a back pocket, a wallet or purse. In terms of dissemination and reaching an audience it is mobile, flexible and easily transported. Conceptually, ‘Night Scenes in the City of Brotherly Love’ is an evocative title for a document possessing nine portraits, most probably edited from a larger series of images, whereby these boys would, when refolded, return to face to face to one another, and rest upon one another. Hine highlights, with the assistance of the designer, the plight of these individuals, while simultaneously reminding the viewer that these young boys too belong to a community. As the artist and writer, Allan Sekula has commented of Hine’s work:

Lewis Hine is so exceptional, and so difficult to assimilate to models of early photographic modernism despite the modernity of his subject matter and the rigorous descriptive clarity of his style: he pursued strong aesthetic ends without losing sight of an ethical mission, or, to put it another way, he pursued an ethical mission without losing sight of strong aesthetic ends. (1997: 50)

In 1939, one year before his premature and impoverished death, the art historian, Elizabeth McClausland wrote about the significance of Hine’s role to photography:

To understand fully the magnitude of Hine’s achievement in documentary photography, one must understand not only the character of the man (his shyness and modesty which made it painfully difficult for him to force himself into factories, mills and slums where his photographic assignments took him) but also the fact that basically Hine did not know or care a great deal about technique. He learned photography backwards, as he frankly says. He took flashlights before he had ever taken a snapshot; he learned to make time exposures by going out and doing them. The modern scientific approach to the medium is completely alien to the Hine psyche. As said before, he blazed away; and by virtue of the sureness of his institution, and the single-minded directness of his objectives, he produced photographs of amazing beauty and powerful social content.(1974 [1939]: 18)

A version of this text was included as part of my practice-led doctorate thesis, the abstract of which can be viewed here.

You are currently browsing entries tagged with Elizabeth McClausland at THE MARKET.