will be launched at

Opening words by Elina Heikka, Director of The Finnish Museum of Photography/Suomen valokuvataiteen museo and presentation of the book by the editors, Anna-Kaisa Rastenberger and Iris Sikking.

Followed by statements from contributors to the book on the question Why Exhibit? from Lisa Barnard, Mark Curran, Bettina Leidl, Rune Peitersen, Karolina Puchała-Rojek, Anna Tellgren and Penelope Umbrico. 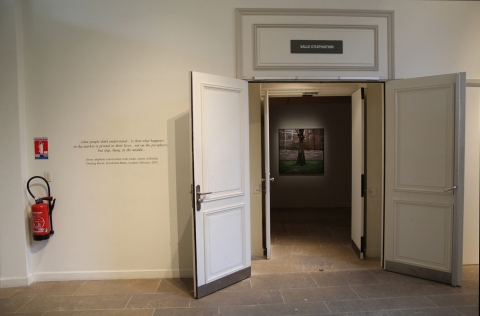 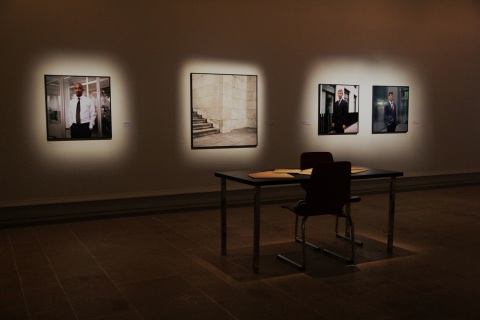 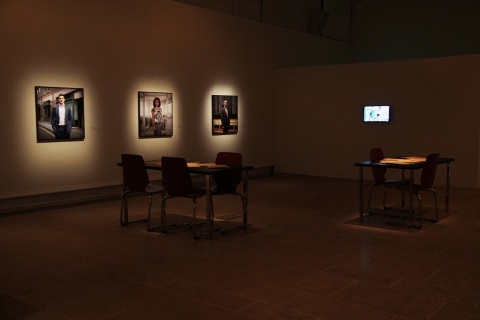 The image below from the installation is titled The Normalisation of Deviance II shows Spectrograms, a moving visual representation of the soundscape of the installation. The soundscape has been generated through the data collated by an algorithm to identify how often the French Minister of Finance, Pierre Moscovici used the word Market or Markets in his public speeches during the year, 2013.

Online reviews of the installation

The project has been generously supported by the Arts Council of Ireland and the installation in Paris by Culture Ireland.

…what people don’t understand… is that what happens in the market is pivotal to their lives… not on the periphery, but slap, bang, in the middle…
(from telephone conversation with Trader (name withheld), Dealing Room, Investment Bank, London, February 2013)

Mark Curran’s challenging new project THE MARKET sets out to make visible – literally and metaphorically – the sphere where our futures are speculated upon. His multi-media installation includes photographs, films, transcripts of interviews and a soundscape that investigate the functioning of the global stock and commodity markets. From Dublin to London, Frankfurt and Addis Abeba, the artist concentrates on the experience of individuals working within a supremely complex system. In the installation at the Centre Culturel Irlandais, the relationship between the individual and the abstract algorithmic systems of the market is heightened through a sound piece designed by Ken Curran that permeates the gallery space, which is generated from algorithms identifying the words market or markets from public speeches given by the French Minister of Finance, Pierre Moscovici.

Full programme contextualising the exhibition on the opening weekend includes panel discussion with David McWilliams (Writer & Economist), Alfred M’Sichili (Philosopher & Political Economist), Helen Carey, Mark Uzan (Reinventing Bretton Woods Committee) and Mark Curran, an evening with the organisers of ‘Kilkenomics’.
In addition there will be a special screening on Saturday, February 1st at 5.00pm of the documentary, Skin in the Game, directed by Donald Taylor Black, (Filmmaker and Head of Department of Film & Media, IADT) addressing the response of artists in Ireland to the 2007 economic collapse.
Algorithms and soundscape design: Ken Curran.
The full programme is available here.
This project was generously supported by the Arts Council of Ireland & the Arts Council of Northern Ireland.
It was presented in Ireland at Gallery of Photography, Belfast Exposed and Limerick City Gallery of Art as part of a nationwide artistic project in 2013, curated by Helen Carey (director of Limerick City Gallery of Art), to mark the centenary of the 1913 industrial conflict known as the Dublin Lockout.
The installation and events in Paris are supported by the Arts Council of Ireland and Culture Ireland.
Preview of show in Paris by Actual Colours May Vary can be found here.

You are currently browsing entries tagged with Paris at THEMARKET.