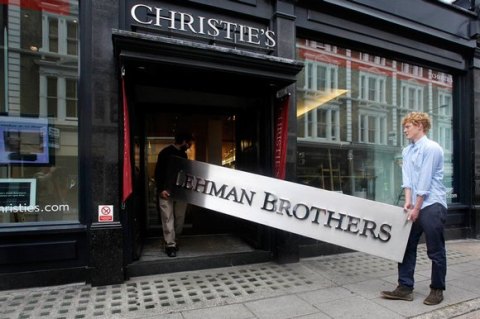 Christie’s announce the auction of Lehman Brothers: Artwork and Ephemera which will take place at South Kensington on 29 September 2010 offering artworks and selected items of interest which once adorned the walls and offices of the British and European arms of the former banking powerhouse Lehman Brothers.

From the press release published in August 2010, under the direction of the administrators of the broke investment bank, once the fourth largest in the world, artefacts including the sign which had adorned the entrance to their offices in London’s Canary Wharf (image above) and also the contents of the art collection which included works by Gary Hume, Lucien Freud and the photograph, New York Mercantile Exchange 1991, by Andreas Gursky, were to be auctioned at market.

The timing of the auction was also significant, coinciding with the second anniversary of when the company went into administration. Citing the experience of the dismantlement of Enron, one of the administrators observes:

The brothers Lehman collected artwork which adorned their offices since the 19th century. Over the subsequent years, of course, as the business expanded and the leadership changed, so did their corporate taste in art. We are excited to be working with Christies to offer the art collection owned by the companies in Administration. The auction date was selected to approximately coincide with the second anniversary of the Administrations. We think that there are many people around the world who would like to acquire some art with a Lehman connection, and we have therefore timed the sale to ensure that potential buyers can view and bid efficiently online. As with the Enron auction, some seven years ago, when we had bids from 43 countries, we expect internet bidding to be fast and furious – having the capacity to cope with a large volume of global bidding was one of the key reasons why we chose Christie’s.

Recognised as one of the central pillars of the global market and subsequent architects of the global economic collapse, and mindful of the Gursky image, Lehman Brothers would appear to have been returned to the simultaneous site of its making and undoing.

You are currently reading Lehman Brothers: Artwork & Ephemera at THE MARKET.