Unlocking the myths of our past to understand the present. 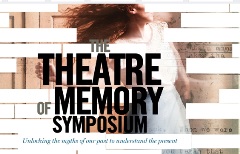 (image courtesy of the Abbey Theatre)

The symposium takes place at the Abbey Theatre, Dublin January 16-18, 2014

In this time of historical centenaries, Ireland’s national theatre presents a three-day symposium to debate the role of theatre in commemoration. Leading Irish playwrights, actors, directors and academics will come together to discuss the role of memory in making theatre and the challenges of commemorating historical events. This symposium will be a major event in Irish theatre and is an essential occasion for theatre enthusiasts and the general public. Symposium speakers:

You are currently reading The Theatre of Memory (Symposium), Abbey Theatre, Dublin at THE MARKET.